This event has already taken place! Please make sure you are in the correct year. ×
Oct
12
Saturday
Oct
12
Sat 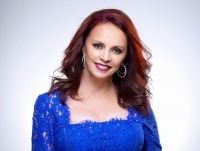 Sheena Easton, whose career has spanned the last 30 years, is a top concert attraction around the world, having performed in the U.S., United Kingdom, Canada, Hong Kong, Bangkok, Singapore and Taipei, her last album in Japan “My Cherie” Was a number one hit. Other hits include “For Your Eyes Only”, “Morning Train”, “Sugar Walls”, “Telefone”, and “Strut”. Her early musical influences were Motown, Barbra Streisand, rock and 70’s soul. Her recording career has included Gold and Platinum albums in the United States, Europe and Asia. She has received two Grammys, and was the first artist to have top five records on five Billboard’s charts.
Get Tickets
Links: https://rivieratheatre......rg/event/sheena-easton/